You are here: Home / Biological Hazards and Weapons 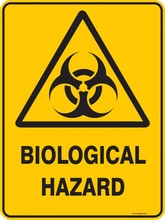 Biological weapons are disease-causing germs such as bacteria or viruses used to intentionally inflict harm upon others.  Toxins and poisons that are derived from biological sources, such as the botulism toxin, are also considered biological weapons.

These germs or poisons may be released as weapons through explosives such as bombs or missile warheads, or through other means such as the mail (as demonstrated by the anthrax incidents of fall 2001) or the release of infected humans or animals into public areas for example.  Potential targets of biological weapons include military personnel, civilians, water supplies, crops, stored food or farm animals.

Experts believe that the most likely germs or toxins to be used in the event of a bio-terrorist attack are smallpox, anthrax, botulism or plague.  Though biological weapons have the potential to hurt many people, there are many methods to prepare for and reduce the risk of attack and to respond effectively in the event of an attack.

Most experts suggest that biological weapon capabilities are probably beyond the scope of terrorist organizations.  However, the anthrax mail attacks demonstrate that bio-terrorism is a possibility.  But the public response to those attacks demonstrated that proper preparedness and response dramatically reduce the harm inflicted.  As homeland security agencies work to prevent attacks from ever occurring and local agencies work to increase preparedness and response in the unlikely event of an attack, the general public should strive to increase personal awareness by obtaining general information that would be useful in the event of an emergency.